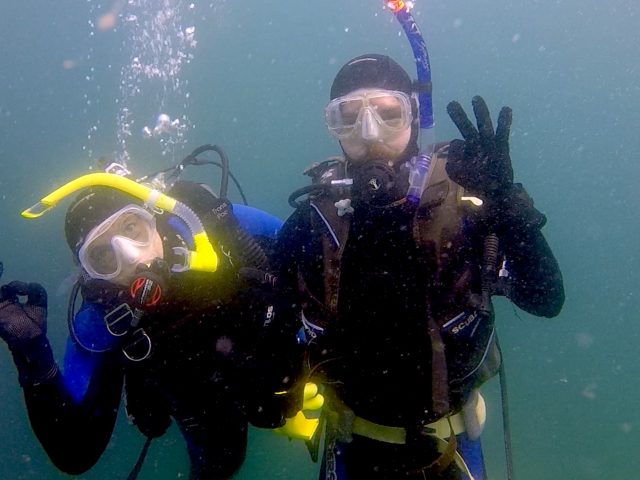 One of the best reasons to dive Catalina is the variety: the variety of animals, the variety of dive sites, the variety of underwater terrain. If you want to explore a kelp forest, or search the sandy areas for bat rays, or look deep into rocky crags for eels, it’s all available at Catalina—sometimes in one dive site!
Over Labor Day weekend, the Barnacle Busters took a group of newly certified divers, students and long-time members aboard the Cee Ray for another fantastic summer day. We were all eagerly waiting for our first dive; some had new cameras to test out, some had new computers or masks they were breaking in. I was eager too, but that didn’t stop me from climbing into a bunk for an hour-long snooze on the way to the island after a hearty breakfast!
Our first stop was Johnson’s Rock and the kelp forest there was something to behold! After seeing these areas just a few short years ago with zero kelp, it’s such a huge relief to see them thriving and strong again. We spent our whole dive in the forest, working our way along the rocky edge where it was exceptionally healthy. I stopped to have a deeper look and was rewarded with a juvenile spotted shark sleeping under a rocky overhang. There were plenty of abalone around as well, so I took a moment to feed one some kelp.
From there we moved to Black Rock and our surface interval was spent munching down on some Monkey Bread, a Cee Ray specialty! Yum … Black Rock happens to be one of those all-in-one dive sites. There are the sandy areas, the rocky crags, the kelp forest, pretty much everything something for everyone.
This dive started a bit awkwardly with some computer failure and other malfunctions threatening to abort the dive. I took one buddy back to the surface and then went back for the others, but they had left the spot where I had left them (they had malfunctions of their own as it turned out). I decided to circle the area for signs of them and felt a tug on my fin. Thinking it might be one of my buddies, I turned to find a Harbor Seal looking at me like he wanted to play. I grabbed my GoPro and got it rolling as I tried to follow the seal through the kelp. It was too fast for me, so I switched off the camera and headed back to where I was and then I saw the seal again below me turning over abalone shells, looking for a meal. I switched the camera back on, and the seal gave me a little show, not at all bashful like others I’d seen at Catalina. After a few minutes and a couple more tugs on my fins, the seal left, on to more distractions. But I was exhilarated!
Once we were all on board, we discussed our various gear misfortunes and misunderstandings and made plans for the next dive, which would also be at Black Rock. While variety is a big bonus, sometimes there are good reasons to stay and dive at the same site. In this case, other sites we had looked at along the way had currents that would have made the diving difficult, so best to stay where the conditions are best. Plus, I may get to see that little seal again! While the seal was a no-show for round two, we still saw plenty: a shy-but-curious octopus, several bat rays hovering by, a few juvenile sharks napping and a ton of sea hares!
Back on board we ate dessert and had video show-and-tell on our laptops before retiring to the bunks for a ride-home snooze. 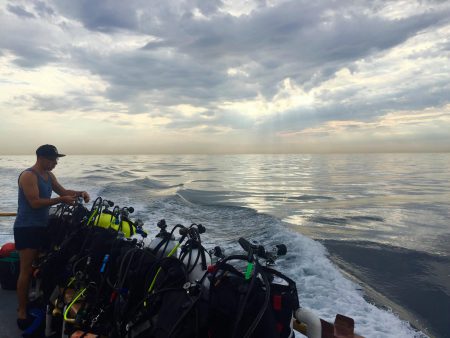 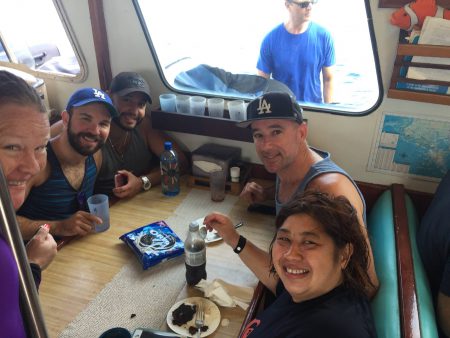